When The Epiphany was struck by an unknown object, a large proportion of the colonists on-board took refuge on Life Boats that when launched, landed on Maria's Galileo Continent. The Story Mode starts with the player emerging from one such Life Boat, and most of the other NPCs found in the story-line arrived on, and have set up camps around them. 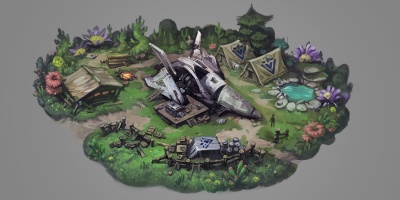 The Life Boats are short-range escape vessels not designed for extended flight or even takeoff from the planet's surface. Nan Yang claims that a retrofitted Life Boat would not be capable of crossing the Wind Belt to reach Newton Continent, and so an alternative solution must be devised.

The inhabitants of the Martian Colony did not use a Life Boat, they arrived on Maria on an atmo-skipper. It is unknown where the Life Boat that carried Ava Azniv and Peter Asimov is located. (anyone want to check The Desert?)